I feel that since I’m at Episode 20, this is a perfect time to do a mini-recap. It keeps my mind fresh of the story and let’s anyone who wants to watch the show keep up with what’s going on without having to go through every recap. Yes, this is the lazy man (and woman) recap. I’m also adding links to the actual episode recaps for anyone who wants a in-depth description.

Gao Zhan is the more favored Second son of the Emperor, who dies in the first episode. Gao Zhan and his sister the First Princess are borne by the former Empress who died at the hands of the Current Empress Luo, who is also the mother of Gao Yan, the elder, weaker, and sicklier son of the Emperor. Empress Luo kills the Emperor and then installs her son on the throne when Gao Zhan is not in the palace to stop her. She is thwarted during the first attempted by the Royal Concubine Xiao, also known as the Eternal Princess of Liang (a fallen country). However, Gao Yan does sucessfully become the Emperor. Royal Concubine Xiao is the wife of Gao Yan, but she loves Gao Zhan. Lu Zhen is also introduced as the Eldest Daughter of the Potter House of Lu, she is capable and smart, and a great problem solver who saves her family from ruin in the first episode.

Gao Zhan survives the Dowager Empress Luo’s assasination attempt on his mad dash to the capital. He meets Lu Zhen, who takes a leap of faith and smuggles him into the capital. Gao Zhan comes back and is named the Crown Prince, outwitting the Dowager Empress. Lu Zhen’s stepmother conspires with her brother to have Lu Zhen killed off because Lu Zhen is set to inherit half the money of the house when Lu Zhen marries. Lu Zhen meets Gao Zhan, The Stepmom kills Lu Zhen’s father and blames it on Lu Zhen. Lu Zhen escapes her Stepmother and her plans to marry Lu Zhen to an old man as a concubine.

Lu Zhen is captured and rescued by Gao Zhan. Lu Zhen tries to enter the palace as a maid but has to make a fake ID in the process. She is accosted by the ID maker and hits him, she now because a wanted felon. Lu Zhen passes the maid’s test but is found to have a fake ID. She is thrown out of the palace. Gao Zhan visits his sister but meets another assasination attempt, which he wards off but is gravel injured. Lu Zhen finds him and nurses him back to health. She gives a despondant and suicidal Gao Zhan the SPEECH that makes him do a double take and fall in love with her.

Lu Zhen and Gao zhan’s relationship develop, she gives him a back rub and takes care of him. He gives her a jade pendant and a yellow flower, they dream about having a life in the countryside. However assassins come looking for them and Lu Zhen falls off a cliff in the process. She survives and tries to pawn of the jade pendant in order to buy passage to another country. She hears that the jade pendant is very precious, it’s from the First Princess (Gao Zhan’s sister) and uses to become a Palace Maid. She attracts the hatred of Wang Shang Yi, the right and of the Royal Concubine, who notes Lu Zhen’s resemblance to the Royal Concubine. She also gains the attention of Lou Qing Qiang, the right hand of the Dowager Empress. Lu Zhen makes friends and enemies. Shen Bi another maid, hates Lu Zhen to the core.

Lu Zhen shows to be a smart and resourceful girl, she shows this as she is a maid in training. Shen Bi and Shen Qiu Niang make lots of trouble for her, which she is able to over come. Wang Shang Yi uses teacher Song to make Lu Zhen’s life miserable, but Lu Zhen is able to withstand it. However, teacher Song hears about Lu Zhen being a wanted felon on the outside and Shen Qiu Niang accuses her in front of Lou Qing Qiang. Lu Zhen uses the Princess’s name to quell suspicions. Shen Qiu Niang is punished but Lu Zhen is able to placate her and befriend her in the end. Gao Zhan warns the Dowager that he knows what she’s doing and if she doesn’t back off he will reveal it to the Emperor. She decides to stand down temporarily.

The maids in training are ordered to makes shoes for a banquet. Dowager hates the Royal Concubine and tries to get the Emperor, her son to look at other women, but he only has eyes for Royal Concubine. Teacher Song makes trouble for Lu Zhen, and Shen Qiu Niang gets in the middle of it accidentally and is killed. Lu Zhen is shaken and tries to burn some paper offerings for Shen Qiu Nian’s ghost, she’s caught and is saved only because she is smart and can recite the Maid’s rules and that Teacher yang defends her in front of Wang Shang Yi. 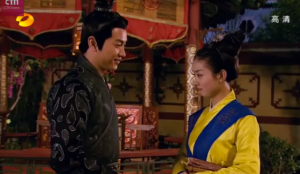 For the Dowager’s Birthday and also the Maid’s test (to see where they will be placed in the palace), Lu Zhen decides to make a silk tent with 100 words for Luck, Shen Bi sabotages it by stealing one of the characters. Lu Zhen goes to the Palace where the word Luck is in the Dowager’s original language and is mistaken for an assassin. However, the Emperor comes and meets her for the first time, noting the resemblence bewteen Lu Zhen and the Royal Concubine. He not only spares Lu Zhen’s life, he writes the character for her. Lu Zhen happily walks back to her residence when she meets Gao Zhan again. He adorably pulls her back every time she tries to leave and tells her that he is a palace guard (instead the truth, that he is the crown prince). She shows the him the jade pendant and he tells her that it’s hers and only hers. Lu Zhen comes first in the Maid’s Test but Wang Shang Yi tells her that she will be banished from the palace. Lou Qing Qiang comes to fight for her and the matter is brought up to the Dowager and Royal Concubine.

Lu Zhen is worried that her face and her resemblance to the Royal Concubine will incite the Royal Concubine’s wrath so she rubs pepper and fools both the Royal Concubine and Dowager into thinking that Lu Zhen’s face is ruined. She saves her self and gets assigned to the Palace of Isolation. She meets the Dowager Concubine there and soon becomes a favorite, inciting the jealousy of He Rei and Lu Xun, the head maids. Lu Zhen becomes friends with Dan Niang. She gets very sick and has to move the sick bay, where she meets Du Si Yi, who will one day become her mentor. Gao Zhan asks after her from another maid who likes him herself. She lies that Lu Zhen is not in the palace, so Gao Zhan doesn’t know what happened.

Gao Zhan finds out where Lu Zhen is and meets her, trying to take care of her. Lu Zhen is elevated to 3rd level maid and then 2nd level, and the Dowager Concubine gets sicker due to the jealous head maids. Gao Zhan tries to help out by getting other maids to look in on the situation but that just makes the head maids panic more, because the Dowager Concubine comes from a country where it is traditional for maids to die with their masters. In the midst of all of the, Gao Zhan finds Lu Zhen and hints that he has feeling for her. The head maids try to kill off Lu Zhen but Hei Rei get’s killed instead. Lu Xun panics and goes to the Dowager Empress for help.