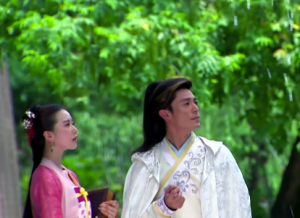 The sun began clawing its way out of the ground as Wei Yun’s story ended. He turned his icy calm face towards Tu Suo

“The Jade Rabbit was banished to the moon by the Duke of the 7 Stars. I started a war with the Emperor. But neither of us could win.” Wei Yun looked at the fading moon, lost in thought.

Grandfather too gazed at the moon, “She watched from the moon as her love ones died and her empire fell.” There was tears in his eyes, “I failed her.”

Tu Suo squeezed the old man’s shoulder, “I am here. I will resurrect the empire.”

The old man looked at Wei Yun, “He will help you. He owes the Jade Rabbit that much.”

Tu Suo frowned, “Yet he destroyed my empire. Did your promise to the Jade Rabbit mean so little?” He glared at Wei Yun.

Grandfather patted Tu Suo’s arm, “Let the past be the past. There are things you do not know. We all are forced to act for the greater good.”

Wei Yun chuckled humorlessly, “And isn’t that why you used Yu Zhu’s brother to cast her out of the palace? Hwang Wu tells me of a young king named Xu Long Hui in the human realms whose wives seem to die mysteriously, no more than a year after he marries them. I’ve heard Yu Zhu talk about her brother’s affliction. You were the one who planted the demoness in his heart. You gave him a reason to cast her out and send her to someone he thought he could trust and protect her. Once she was here, you knew I would feel Wei Tian’s heart and perhaps even the presence of Mei Yan’s daughter. Xu Long Hui thought he had sent his sister to a safe place. Old general, you were using Yu Zhu like a lure to draw me out.”

The Grandfather’s eyes were defiant, “You were not the only one the Jade Rabbit entrusted her secret to.” The old man looked at Wei Yun defiantly, “I have a duty first and foremost to the house of the Jade Rabbit. You owe it to the Jade Rabbit to help Tu Suo resurrect the Empire”

“If I don’t, you would reveal Yu Zhu’s true identity all the realms.”

“The Jade Rabbit gave her freedom to save Yu Zhu. It is time the debt is repaid.”

Yu Zhu woke up and saw a shadow outside her door. She frowned and threw on her robe. Wei Yun stood outside, his eyes lit up as he saw her. She grinned up at him, “Grandfather let you in?”

“I have a favor to ask of you.” He took a deep breath and said, “May I borrow your pendant?” Yu Zhu smiled quizzically but didn’t question him. “On the account you’ve saved my life on multiple occasions, I trust you won’t be stealing this from me.” His smile was brittle as he held the jade dragon pendant. Wei Yun swallowed, “I want to show you something.” He closed his eyes and the wind encircled them. Whispers grew louder and louder.

“Three hundred years ago a goddess was killed for having a child with a human warlord. My brother Wei Tian gave his heart to create a spell to hide the child from those who want to kill her.” Yu Zhu saw the story in the winds, she saw the sword plunge into Wu Kang’s stomach, watched as Wei Tian ripped his own heart out of his chest and put it into a jade pendant, her jade pendant. Yu Zhu could not help but shudder as Wei Yun continued emotionlessly, “This child’s spirit was put to sleep until she was born in a safer time. I fought to keep the secret from those who want to kill the child. I fought to keep you safe.” She saw the price of the her birth, the death of thousands and the suffering of the human, gods, and demons alike.

The vision changed, Yu Zhu saw her brother, escaping into the forest and being found by Grandfather. She saw him perform as spell that not only saved Xu Long Hui’s life, but ensured that he would be the slave of the demoness inside of him. Everything was done so that she could meet Wei Yun, so that he knew she existed.

Yu Zhu snatched her hand out of Wei Yun’s hold, she dropped to her knees gasping. Wei Yun knelt by her but did not touch her.

Yu Zhu’s head spun. “I’m the reason why my brother suffers…” She felt as if the air inside her lungs was being sucked out. “I am the reason why everything, all these years of warfare.” She looked at him through pain filled eyes, “I saw you… killing thousands of solders. I saw every inch of your skin soaked in blood.” Yu Zhu felt as if she was seeing Wei Yun for the first time, “Why are you telling me this?”

Wei Yun clenched his fists, “In three years time you will inherit the powers of a goddess. At that time the Emperor of heaven will try and kill you at all costs. I plan to make sure that never happens.”

He looked at her, “I can protect you. By acting now, I will make sure you can be safe in three years time. And I will help you take your rightful place in heaven as a princess of goddesses. I can make everything right” There was a light in his eyes that made Yu Zhu uneasy, it was at someone she could be.

Yu Zhu felt as if the earth was tilting, for the second time in her life, she felt well and truly lost, “I don’t want to be immortal, I don’t want to cause any more bloodshed because of my existence.” She held out her hand, “give me back the pendant, I know what it can do now. If I have it on my forever, I can hide my godhood. That is what I choose. To remain human forever.”

Wei Yun looked at her and shook his head, “You will understand once I finish what I plan to give you.” He gently lifted her to her feet and pressed his lips to her forehead. “Three years.” He muttered softly into her hair, give me three years and I will create a world where you can thrive.”

Yu Zhu shook her head and pushed him away, “You’re not listening. Wei Yun, I don’t want people to die because of me. No more.” His continued as if he couldn’t hear her, “I will rain fire on our enemies. I will keep you safe.” He gripped her arms, as he if wanted to make her understand.

Lin Yu ran up, “Yu Zhu!” She paused as she saw the two of them, Yu Zhu’s eyes were still full of tears. Lin Yu drew her sword, “Let her go.” Yu Zhu shook her head as someone landed beside Lin Yu and plucked the sword from her hands, “You’re being rude to a god, little snake.” Huang Wu drawled as Lin Yu turned and glared.

“Huang Wu, return Lin Yu’s sword.” Wei Yun sighed and released Yu Zhu’s arms, “I mean Yu Zhu no harm. But I am about to embark on a very dangerous journey, one that might keep me from being by her side. I need you to look after these two girls.”

Huang Wu’s face fell, “No. Don’t stick me at this rude little snake’s side. Besides this place is practically a hovel compared to the Crow kingdom.” Lin Yu stepped on his foot, “I don’t want some stupid crow flapping around me either.” She said as she watched him try and hide his pain.

“I plan to have you escort them to the human word” Wei Yun held out his hand, “The demons realms will be unsafe for now.”

Huang Wu’s eyes flashed, “What do you mean?”

Wei Yun shook his head, “This is the price of owing me your life, the price of having me help your father create his dynasty 10,000 years ago. You are to protect them. Take them to Huang Shan, to the Goddess of Mercy Temple.” Wei Yun looked at Lin Yu, “Your grandfather and Tu Suo agree with my plans, they have asked me to let you go with Yu Zhu to the human realms.”

Yu Zhu felt Huang Wu grip her shoulder, Lin Yu struggled as well. But Wei Yun threw a net over them that immobilized them. “In three years time, I will come find you, Yu Zhu. In the human realms, you won’t need the jade pendant’s protection yet, as your essence is still human.” His eyes seemed to show his reluctance at letting her go, “Three years, I will come for you.”  With that he raised a tunnel of winds and threw it at the three young people.

The world around the two girls disappeared, when they opened their eyes, they were in a small temple. Lin Yu twisted out of Huang Wu’s hold, turned and tried to punch him, “Take us back, crow!”

Huang Wu blocked her punch easily with an annoyed look on his face, “I can’t. He threw a lock on the two of you, forbidding your entry into the demons realms” His wings flashed and he was in the air, “But I am a different matter, as I am royalty, it has no effect on me.” He frowned as he climbed into the air,” Something big is going on in the demon realms, I need to warn my father. You two, stay here.” With that, he was gone.

Lin Yu and Yu Zhu watched Huang Wu’s retreating figure, “Was he really that stupid that he would think we would listen to him?” Lin Yu asked Yu Zhu softly.

Yu Zhu’s eyes seemed to glisten, but her voice was calm and cold. “I have no plans to quietly wait for some god to rescue me or give me some sort of strange promise. I will live my life as I chose.” She did want to think about the implications of Wei Yun’s words, she couldn’t even begin to sort her feelings about everything he’s told her. Ignore it, she told herself and run away as if none of this was possible.

Lin Yu smiled at Yu Zhu’s words, “Shall we explore this world? Were do you want to go first.”

Yu Zhu looked to the west and excitement quash the hurt feelings in her chest, burying the pain once more, “It’s been five years since I’ve been in the human realms, there are so many places I want to go and see.” Perhaps, she thought, even find a way to keep me from turning into a god.

Lin Yu’s voice seemed to carry hesitation, “I would like to go see my mother.”