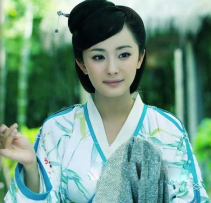 *Actresses that I would like to be the characters

Four people sat under falling peach blossoms of the Eternal Gardens.  A beautiful woman carefully unwrapped hair thin red-orange silk from a young man’s arms. He smiled at her, his lovestruck eyes seemed to never leave her face. Mei Yan was careful to avoid Wei Tian’s eyes as she sat and worked. Wei Tian’s arms felt sore, but he never even twitched as he held the silk for Mei Yan.

“How is it, brother.” Wei Yun drawled, as he lazily waved the clouds to form little shadows that amused him, “That when you are on a battlefield they say your face alone can scare away ten thousand demon warriors. And now that the war’s over, you look like a puppy.”

Wei Tian grinned, a striking young man in pale gold cloth, his was always the good natured and boisterous one of the two. Mei Yan smiled as well, “you both are so young compared to the rest of us gods.”

Wei Yun shrugged, “We are still stronger than everyone in this palace.”

The Jade Rabbit smacked Wei Yun on the back of his head, “What older sister means to say is, show us more respect.”

Wei Tian laughed, “She’s right. Mei Yan is almost two hundred thousand years older than us, and the Jade Rabbit’s one of the first creatures Nu Wa created.” Wei Yun studied both women carefully. Mei Yan was one of the most beautiful women in heaven, the 7th daughter of Duke of the 7 stars constellation. Even if she looked as if she was in her mid twenties, she was a powerful goddess in her own right. Mei Yan was the weaving goddess, she was in charge of creating and maintaining all the colors of heaven and earth.

Wei Yun looked at Wei Tian and sighed, “Well, brother. If only you were born two hundred thousand years earlier, maybe you would have a chance.” Wei Tian’s smile dropped a little, he grew flustered as he muttered, “I…I have no idea what you’re talking about.” Wei Yun laughed as the Jade Rabbit shoved him, her eyes warning him merrily to be quiet.

Mei Yan finished unraveling the last of the silk from Wei Tian’s arms, she smiled. Wei Tian could not help but admire the curve of her lips or light in her eyes. Mei Yan stood up and offered Wei Tian a hand, Wei Tian nervously muttered a thanks before trying to grab her hand, instead he slipped and fell down again.

Wei Yun shook his head as Wei Tian turned to the color of a tomato. On the battlefield, Wei Tian moved with the litheness of a lion, but when it came to Mei Yan, Wei Tian was clumsier and slower than a turtle on land.

“Do you have to go to earth now?” Wei Tian asked once he had regained his balance. Mei Yan nodded, “I’ve finished making all the different colors for the next five years’ season. Once I’m there, I have to sew on the new colors.”

The Jade Rabbit sighed, “And when Mei Yan says that, she means everything, from every leaf of every tree to every stream and creek, it takes a whole human year for her to finish.” The Jade Rabbit groaned as she looked at the ten cartloads of silk that sat underneath the peach groves, “At least it’s once every ten human years. I wish time didn’t move differently between the heaven and human realms.”

“I’ll go with you.” Wei Tian volunteered eagerly. “I’ve only seen you make the colors, I want to see you sew it in.”

Mei Yan smiled, “I’ll only be gone a day. You’ll hardly miss me.”

Wei Tian sighed, “But a day in heaven is equivalent to one year on earth. I will still miss you.” Behind him, Wei Yun rolled his eyes, he could never bring himself to say something as sappy as that. Wei Yun stood up and dusted his robes, “Brother, you promised me that we would race the blood sweat horses today. Besides, we just returned from the human realms. After the Demon Wars, do you really want to go back so quickly?”

The Jade Rabbit made a face as she said, “If Wei Tian goes down now, imagine the panic he’ll cause. People will probably think that he’s come again to destroy their lives again.”

“We also saved a lot of lives.” Wei Tian pointed out.

“There is a giant crater on earth, where there use to be a mountain. Do you remember doing that?”

Wei Tian was silent for a moment, “Point taken.” He finally admitted it.

Wei Yun smiled at his brother, there was a competitive edge to his smile, “Brother, if you lose to me in the races, I get to wear the Jade Pendant the Goddess Nu Wa gave you.”

Wei Tian’s eyes lit up as well, “And if I win?” Wei Yun grinned, “You get to use my Tai Shan sword whenever you want.” Wei Yun turned and walked away, sure his brother would follow.

Wei Tian looked at the two girls and looked back at Wei Yun, his eyes indecisive. Mei Yan laughed, “Go.” He grinned, “I’ll wait for your safe return tonight.”

“Wei Yun, wait for me!” Wei Tian called running after him. Wei Yun turned around, there was laughter and resignation in his eyes as he said, “Always.”

Mei Yan watched them go, she grinned as they jumped into the clouds, two young and powerful warriors delighting in the peaceful moments after a war.

The Jade Rabbit frowned at her, “He is the best choice for you.  Wei Tian is the one you should fall for, not the human you’re secretly meeting on earth.”

Mei Yan’s grin faltered, she walked to the carriages to check on her weavings. The Jade Rabbit followed her, “Mei Yan.” The other girl pretended to be busy. The Jade Rabbit couldn’t take any more and grabbed her friend by the shoulders, “How long do you want me to lie for you? You’ve broken the most serious of Celestial laws, it’s punishable by death.” The Jade Rabbit accused her friend, “You’ve fallen in love with a human.”

Mei Yan’s eyes filled with tears, “This is the last time I see Wu Kang. I promise.”

The Jade Rabbit wanted to shake Mei Yan from her folly, “Gods and Demons are forbidden to love humans. Do you know what happens to Gods when they give their heart to a human? They lose their Godhood permanently, you won’t be the Weaver Goddess anymore. And when you die, your spirit disintegrates.” She felt dread at the pit of her stomach,”You have risked your life and your magic, time and time again to go see that human. Is he worth dying for?”

Mei Yan gently took the Jade Rabbit’s hand from her shoulders as she said, “Every ten years, we get to see each other for a few months… For twenty of his years, Wu Kang has faithfully waited for me.” Mei Yan’s hands tightened around a ball of silk, ” Sometimes I can see him in the World Mirror. Even if his tribe pressures him to marry someone, he does not bow to their demands. He refuses to forget me.” Mei Yan’s eye brows furrowed, “If this keeps going, he will die alone. If I go and wipe myself from his memories…” Mei Yan felt as if she couldn’t breathe. “He has right to be happy.”

The possibility that Wu Kang would never look at her again made her feel as if she was drowning in an abyss of darkness, but the possibility of him waiting for her for decades and dying alone… She would rather he forgot.

The Jade Rabbit’s eyes widened, the depth of love in Mei Yan’s eyes alarmed her.

“I won’t be caught.” Mei Yan’s mouth was set in a determined line, “I will do my duty, and I only need a few moments with him.” Her eyes were begging, “You are a blessed being, you were allowed to marry the demon of your choice. Please understand how I feel.”

Mei Yan knelt before the Jade Rabbit and grabbed her hand, “Please, you are like a sister to me. Let me do this for him.”

The Jade Rabbit could not harden her heart at the kneeling girl. Mei Yan had never expressed interest in any God. But now she was willing to risk her life for a human. The Jade Rabbit sighed, “I will keep your secret. But, Mei Yan, promise me that you will never see this human again.”

Mei Yan stood, she wiped her eyes and smiled sadly, “I promise. As long as we both shall live.”