At this point I’ve written a ton of chapters for this story and I know how difficult it is to keep track of every character, and there will be a couple more that I’m going to introduce in the next few weeks. So I’m updating the character sheet below, whilst trying not to give too much of the story away.

About Bamboo Rain (Yu Zhu) – A fantasy wuxia novel set in the warring states era that blends martial arts, romance, ancient Chinese legends, folklore, politics of the Human, Demon, and God realms. The story follows the life of Yu Zhu, princess of the kingdom of Dian, whose world becomes strange as she leaves the protection of her kingdom and is thrust into a life of adventure and intrigue.

* These are the actors in the pictures below are the ones I wish would play the characters in the novels, they are all amazing actors and would do these parts great justice.

The Women – in no particular order

Yu Zhu （雨竹）  – The princess who travels to the Demon Realms. She is highly intelligent and has a strong morality streak, but emotionally distant to most people. Yu Zhu is fearless in most situations, even if she knows the odds are against her. She and Lin Yu even started a gang of beggars to fight Ho Pa Lai and all the rich bullies in the town.  She grew up in the inner palaces as the only child of the Emperor, whom she loves dearly. She is said to be as beautiful as her mother and does possess a great deal of martial arts knowledge.

Lin Yu （鳞玉） –  900 year old snake demon. The daughter of the Green Snake and niece to the White Snake. Magically gifted  and very beautiful, Lin Yu is feared by most of the town boys for her aggressive fighting style and even more potent bite. Lin Yu is mischievous to a fault and rarely holds her words back. She and Yu Zhu are closer than sisters.

Hua Er （花儿 ） – the Princess’s chief handmaiden.  A highly trained warrior whose specialty is daggers tipped with poison. She takes her tasks very seriously and though is regarded and treated as a daughter to the emperor, she is in charge of the Princess’s education. She is fearlessly loyal and would always put the Princess’s needs above her own. She and Xu Long Hui share a special history.

Xi Yang Yue（夕阳月） – The deceased mother of the Crown Prince and Princess Yu Zhu. She died during a coup attempt, while trying to protect her children. She was famed throughout the land for her intelligence and strength of will. Xi Yang Yue is part of the the legendary Xi Yang clan, its people are believed to have been the descendants of a powerful Goddess.

The men – Again, no particular order.

Xu Long Hui （许龙回） – A mysterious character whose identity causes an uproar in Yu Zhu’s kingdom. He is cold and ruthless, yet has a strong sense of obligation. Xu Long Hui’s past ties closely with his name and while he is slow to anger, he is slower to forgive.

Huang Wu （黄五）– The Royal Prince Crow, fifth son of the Demon Crow King Hei Tian of the Western Skies. Arrogant, abrasive, and extremely sarcastic. He is extremely powerful, however he had trouble making Lin Yu or Yu Zhu recognize his importance in the world. He has been the favorite son for a long time, even landing the title Guardian of the Sacred Grove, where Wei Yun lives.

Wei Yun （围云）– A fallen god who was imprisoned to the Demon realms, just after he and his brother helped the gods to defeat the demons after the great war. For the battle against demons Wei Yun was give the Tai Shan sword, forged by the Jade Rabbit. Demons use Wei Yun’s name to scare their children, he is said to be feared even by the Gods.

Hong Yan Su （红淹速） – The youngest general and powerful heir of the Hong family. He is universally admired for his leadership and battlefield prowess. Hong Yan Su has time and time again shown to the Emperor that he is the most ideal candidate for Yu Zhu’s hand. The entire kingdom believes that they will eventually get married. His father was once the guard of the decesased Queen Xi Yang Xu 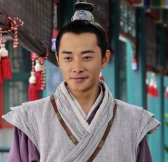 Tu Suo (兔锁) – Lin Yu’s adoptive elder brother. He is quick on his feet and extremely ambitious. There are few people he cares for in the world and he can sacrifice everything for his goals. Few people can tell what he is thinking, as he has become very good at hiding his emotions.

The Emperor – Yu Zhu’s doting father who was fighting at the borders when the siege of his palace occured at the beginning of the story, resulting in the death of all his children and concubines. The Emperor never married after his Empress died.

Shan Ying lang （山鹰狼） – A fearless fighter who is both intelligent and slightly obnoxious. He grew up in the mountains and have no real manners. When he first meets the Princess, she dislikes him but soon comes to realize that he’s actually a very good man. Even though his past is hazy and painful, he’s came out a strong and determined man.  In terms of looks, he is ruggedly good looking the polar opposite of Hong Yan Su’s calm good looks.

Grandfather – A very old demon who has lived since the great war between gods and demons. He once served under the Jade Rabbit, then as Grand General for 10 generations of the Jade Rabbit’s Royal descendants. He was a the fall of the kingdom and helped the last royal child escape.

Wei Tian（围天） – Said to be created by Nu Wa with a piece of coal from the highest volcanic mountain and half of Pan Gu’s heart. He was made alongside with Wei Yun to destroy all demon-kind who wanted the earth for themselves. Wei Tian, along side Wei Yun lead the gods and some demons against the demon King and brought peace to the realms. He was given Hou Yi’s bow

Li Sun （李狲）– A kind hearted doctor who found Xu Long Hui when he was gravely injured. Though he has no idea of Xu Long Hui’s past, he worries about his friends future. Li Sun is a gifted physician, even at his young age, though he chooses to use his skills on the power rather than seek the wealth from the rich and powerful.

General Hong – The revered general who guarded the Empress Xi Yang Yue during the siege by two ambitious lords. He was gravely injured during the battle.

Ho Pa Lai （后爬来） – A rich pig demon who has been the nemesis of Yu Zhu and Lin Yu since Yu Zhu met him. He is spoiled rotten because he comes from the biggest merchant family in town and has never been denied anything in his life.

People who I can’t talk about yet because they haven’t really shown up in the story:

Jade Rabbit （玉兔） – A demon ruler who, after the great fight for the human realms, was granted control of the demon realm by the Emperor of Heaven. Later, the Jade Rabbit then committed a grave sin and was banished to the cold moon to keep Lady Chang’E company.

Mei Yan （美焰）– A mysterious woman from the past. (I can’t say much at this time)

Kingdom of Dian – The home of the Princess Yu Zhu. The Dian civilization is an actually civilization during the waring states period, and is located near Yun Nan, a province in South Western China.

Bui Hui Town – A town near the Demon Forests where Wei Yun lives. Bui Hui is a relatively small town with a few thousand demon residents. Yu Zhu and Lin Yu live on the edge of town, in a small cottage with Grandfather and Tu Suo.