OMG The Emperor is hilarious and his real voice is so sexy….Translation Below

So this is a video from a few months ago about filming.

They start off talking about the skills of the actress, Liu Xue Hua who plays the dowager. They show a scene of the Dowager with the Eldest Princess and Shen Jia Min (whose real voice is so much better than the dubbed on). They also introduce Qiang Ren Liang (Emperor), who admits that he is very green and it’s really scary acting with a seasoned pro Liu Xue Hua who can cry on command and has a great grasp of very nuance of every line of script.

Qiang Ren Liang: She (Liu Xue Hua)  owns dogs and I own dogs. She brought her pet to work. I got really excited so I pointed to her and asked, “Xue Hua Jie, What breed are you?”  She gave me this cold look and told me that she is human. I had meant to ask her what her dog’s breed was. I realized that I shouldn’t get too overexcited otherwise I say wrong things… 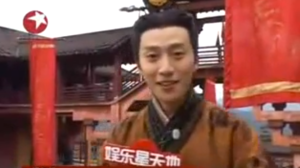 The Lady who plays Lou Qing Qiang tells Liu Xue Hua is one of the nicest and most accommodating actresses ever.  They talk about Liu Xue Hua’s husband’s  accidental death from a fall half a year ago and everyone on set tells the media that this is something that no one wants to talk about.

One thought on “Lu Zhen Behind the Scenes – Focus on the Dowager, Funny Emperor”