If you wait long enough, good things happen. And after four relativly shitty episodes, good things start happening again. If I had to pick the best episode out of ep. 20-30 then it has to be this one. Also, Gao Zhan has an amazing SPEECH that matches the caliber of the one Lu Zhen gives in Episode 3. It’s awesome, moving, and completely on target. It’s the speech of a man who is determined that the woman he loves knows how he feels. To heck with it, everyone should know how he feels about her.

Thoughts from Elizaphantrex: Dear God! Is this the episode when the two star-crossed lovers finally communicate with one another? 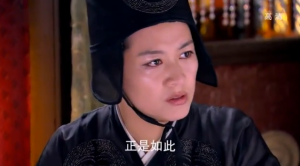 Lu Zhen discusses Shen Jia Min’s motive behind putting the itching past on the harp. As it turns out, Shen Jia Min is trying to get back at Lou Qing Qiang because Lou Qing Qiang’s little brother had killed Shen Jia Min’s best friend. The Interrogator tells Lu Zhen that the Emperor wants to talk to her about the matter.

Lu Zhen meets with the Emperor who tells her that she needs not bow with such a serious injury on her legs (due to the torture), and asks her what they should do about Shen Jia Min. Lu Zhen tells him that Shen Jia Min’s actions are understandable and no one was really hurt. If the Emperor needs to give the girl’s father an explanation, just tell him that the girl got sick. Since it’s a harem matter, he can let the Royal Concubine handle it. The Emperor smiles and tells her that she is a good friend to have. Lu Zhen replies that the Emperor has helped her by carrying the blame for the Wu Toe (he had told everyone that he had given it to her) so she wants to pay him back. 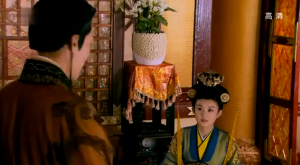 The Emperor tells Lu Zhen that he doesn’t have time to take her back to her residence but he knows someone who does. 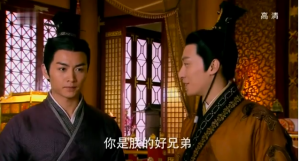 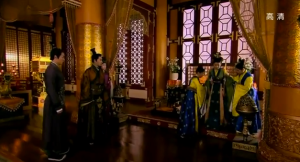 Lu Zhen is surprised as Gao Zhan walks out. They stare at each other and Lu Zhen says hurriedly that she doesn’t need help. She has two girls help her limp out of the Emperor’s palace. 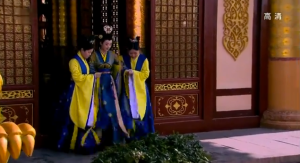 Lu Zhen dismisses the girls once she is outside and she struggles to walk, shufflingly painfully along.

She nearly topples over when Gao Zhan gently grabs her arm and helps her up. Gao Zhan then picks her up and carries her in his arms . She struggles and he tells her to stop talking. 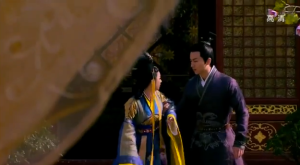 She actually obeys and he carries her all the way back to the palace of Isolation. 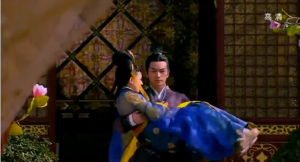 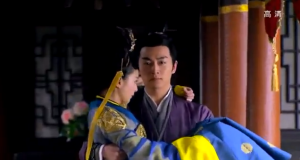 Once they reach Lu Zhen’s residence, Dan Niang runs up to ask what happened as Lu Zhen yells at Gao Zhan to put her down. The other maids rush to get a look of whats going on as well. And, in what I think is the best part of this whole scene, Gao Zhan KICKS the door open and deposits Lu Zhen on the bed. He gently begins to to remove her shoes and place her feet on the bed.

He turns to her and this is the direct translation of their conversation:

Gao Zhan: Do you remember the last time I held you was outside the Royal Concubine’s residence? 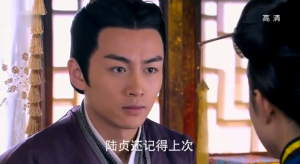 Gao Zhan:  So you remember my true name?

Lu Zhen: but you shouldn’t have done that (him carrying her all the way back)… how will I face everyone after this?

Gao Zhan:  Why not? You are My woman. Your legs are hurt, why can’t I hold you? 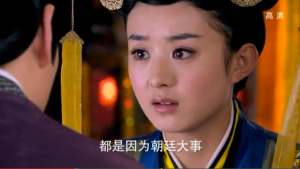 Gao Zhan:  Lu Zhen you must think I have small balls  (or if you prefer “fool” in other translations),  I’m always getting injured or come and go at your call. You must think that I’m someone that can be ordered around. (He grabs her)  You gave me the belt, and I’ve accepted it, so I won’t ever let you get hurt again. Besides we’ve had husband and wife relations already. Are you trying to screw with me and then dump me?”

Lu Zhen looks at him, outraged, “Who’s had husband and wife relations with you?”

Gao Zhan:  He grabs her arm and places it on his arm, the one that she helped heal. “Doesn’t this count?”

Gao Zhan:  “When you begged me to let you go, and I did, and I  really regret it. But today, everyone in that garden will have seen that you are my woman, even if you try to deny it, no one will believe you.”

She smiles a little but tries to beat him up with a  pillow. He grabs her and asks, “Are you trying to kill your husband?” (NICE.)

Dan Niang and Yuan Lu are outside. Yuan Lu teases Dan Niang and Dan Niang grabs his ear. He tells her to be quiet, as long as they don’t disturb the pair inside, everything will be fine. 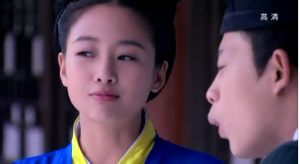 Lu Zhen huffs that Gao Zhan seems very close with Shen Jia Min. Gao Zhan explains that he really does take Shen Jia Min as a sister because he is good friend with Shen Jia Yan, the brother of Shen Jia Min.  Gao Zhan asks why Lu Zhen had decided to forgive him–he had noticed that she had forgiven him when they had met at the Emperor’s residence today. Lu Zhen tells him that it was under the advice of a girl she met in prison.  She tells him: “Two people meeting and falling in love is fated.  Initially I was angry about the lie and scared by the the highness of your position. I could have never thought that the woman trying to kill you is the empress dowager.”  Gao Zhan tells her that he was trying to protect her and she gets a little bit mad, “By lying to me?” Lu Zhen sighs and says, “Its fine, if I was in your position, I would have done no better.”

They cuddle and Gao Zhan tells her that when he saw her walking like that, he couldn’t stop himself from picking her up. Lu Zhen gets mad again and reminds him that she’s a Lady Official. He smiles and tells her that it’s been a while since she’s been like this with him; she’s been so distant and polite. He calls her tigress (grrrowl) and holds her hands. Gao Zhan tells Lu Zhen that he is willing to wait for her until she reaches her goal in the palace. 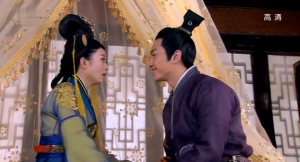 When they head out, Gao Zhan elevates Dan Niang to become a 1st Level maid, making her jump with joy. 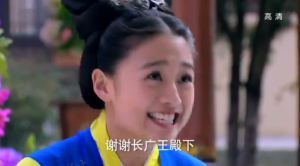 Gao Zhan that night tells Uncle Zhou that he’s thought everything through. His brother the Emperor not only cares for him, but does everything to make Gao Zhan happy. Gao Zhan realizes that he wants Lu Zhen more than the throne, and that he is willing to let the Emperor’s kids have it, he doesn’t want it. Uncle Zhou protests but Gao Zhan points out that the kingdom is prospering and that Gao Yan is a good Emperor. Uncle Zhou says that no matter what Gao Zhan decides, he will support him. 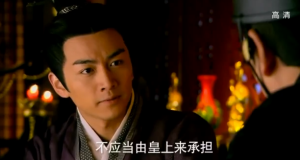 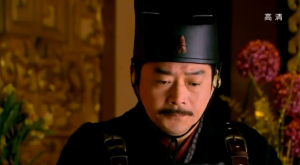 Shen Jia Min comes running to Lu Zhen, having heard that the ghost ordeal she suffered was Lu Zhen’s doing. Lu Zhen asks why she was so scared… and Shen Jia Min doesn’t have an answer. She tries to beat up Lu Zhen but Lou Qing Qiang comes to Lu Zhen’s rescue. Shen Jia Min leaves unhappily. 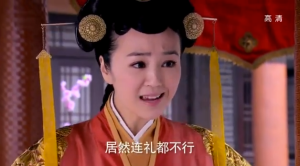 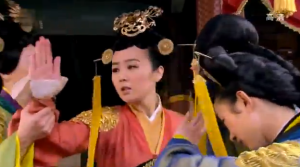 Lu Zhen goes to her teacher, feeling a little guilty but her teach tells her that it’s not a big deal. Lu Zhen says that she’s used some of her good will with Wang Shang Yi by asking Wang Shang Yi to move Lu Zhen to the Office of Clothing and Silks as the head Lady Official. That way Lu Zhen won’t have to suffer under Shen Jia Min

Lu Zhen makes good on her promise and rescues Du Mei Er from the prison by writting down that Du Mei Er had died, and sneaks her out of prison. 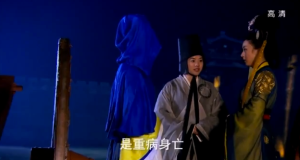 Lu Zhen becomes the Head lady Official of the Clothing and Silks office and she recognizes Shen Bi as one of the head maids. Ling Long comes and asks Lu Zhen to take her with her to the Clothing Office.

Gao Zhan tells her that she needs someone she trusts. Why not take Ling Long? Also, isn’t there someone there named Shen Bi who is like a sister to her? Lu Zhen tells him that Shen Bi was the one who tattled on her to the inspector last time for being a fellon. Gao Zhan tells her that Shen Bi was very caring and was trying to help Lu Zhen when Lu Zhen was in prison. Could it be a misunderstanding?

Gao Zhan tells Lu Zhen that it could be like their relationship: initially Lu Zhen disliked Gao Zhan but now she’s so sweet and caring towards him. He puts his arm on her shoulder, and she brushes  it off.

He tries flirtatiously to get close to her face, and she pushes his head away. It’s really cute. (Just adorbs) 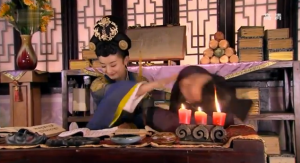 Lu zhen has some trouble understanding the clothing styles but Shen Bi brings her some valuable books that summarize everything. (How convenient.) Lu Zhen carefully observes Shen Bi.

Lu Zhen still doesn’t trust Shen Bi but decides to give her a chance after Lu Zhen’s superior tells her that as long as some one is useful, they should be used. Lu Zhen tells A Bi (alternative name of Shen Bi) to take some spring clothes to Gao Zhan’s palace. Lu Zhen tells Ling Long to secretly follow Shen Bi to make sure that she doesn’t purposefully mess up. 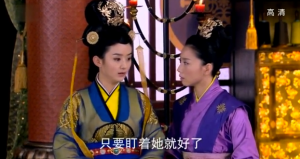