Ye Chen basically proves that he is head over heels in love with Ping An in this episode and it’s very sweet. He confronts Bai Ming Li about who the real daughter is once he learns that Ping An is to move into Bai Ming Li’s house. She agrees that yes, Xi Le is not her real daughter, but Ping An is. Right now she has to protect her real daughter because there are people who want her to die out there, so Ping An must be kept hidden. Bai Ming Li has a brain tumor and maybe six months to live. After that she’ll make sure that both of the girls are cared for. She begs that he stay and protect Ping An even though Ye Chen wants to quit. When Ye Chen goes to visit Ping An, he doesn’t have the heart to quit. Meanwhile, Xi Le visits Zi Wen in the hospital and he basically makes her fall in love with him and she takes care of him during the entire time. But that turns out to be the next part of the plan because he breaks up with her and screws with her mind because he claims that since she is the daughter of Bai Ming Li it would make him look like a social climber if he stayed with her. She is devastated by his break up and goes out with Huo Ying. Bai Ming Li collapses and is rushed to the hospital where it becomes clear that she needs treatment as soon as possible. Instead she pushes to get Xi Le introduced to society, that way she can force those who have been threatening her and her daughter to make the next move, by showing that she is serious in making Xi Le the heir.

Highlight: The cooking scene where Ping An is making a mess of dishes and turns on the fire alarm. Even though Ye Chen smirks and makes faces while she cooks, he comes with an unbrella and shelters her from the sprinklers even though she nearly burns down the kitchen. 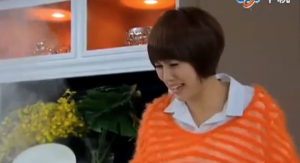 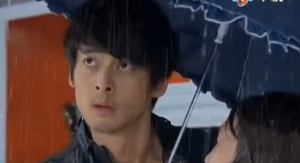 Also he has this great silent dialouge when he looks at Ping An thinking, “You just found your mom, but due to circumstances, you can’t even get to know her. You aren’t allowed to even recieve a little bit of motherly love. The only reason I’m still here is that I want to be by your side when you find out about everything.” That is the sweetest and most poignant words of adoration that he’s ever thought. He just melted the hearts of the legions of girl-fans.

Okay. I officially and irrevocably love Dylan and his character. He’s everything I think every girl wants a guy to be, even if he did go to prison (the character) And his devotion to Ping An is the cutest thing I’ve seen in this drama. Especially with the douche-ness of Zi Wen. Yes we know he’s been hurt and badly but taking it out on Xi Le will lead to consequences that no one will be happy with. I love the two leads, they’ve got great chemistry. What I hope doesn’t happen – which often does in Asian dramas, is that when the main heroine falls in love she tends to lose all personality and everything that defined who she was. I sincerely hope and pray that Ping An doesn’t lose her spunk as she find herself being pulled into the intrigues concocted by her mother. Please let her be as dynamic as always and for their story to be as interesting as it is now.